Read the full ArtsATL Review written by Curt Holman below or visit the site here.

With his tragic comedy Waiting for Godot, Samuel Beckett makes the audience almost painfully aware of the passage of time. During one particularly patience-trying moment, a character moans, “Time has stopped.”

Longtime regulars of 7 Stages will be particularly conscious of the years with the company’s latest production of Godot, its 40th-season opener through October 14. The company has a long history with the play, which was directed by legendary stage director Joseph Chaikin in 1992 and Beckett’s former assistant director Walter Asmus in 2004. Both shows starred Don Finney and 7 Stages cofounder Del Hamilton as benighted tramps Estragon and Vladimir, respectively, and felt like definitive productions: Chaikin’s in particular seemed to find every bit of wrenching pathos and rollicking comedy in the text.

The 2018 Godot, directed by artistic director Heidi S. Howard, reunites Finney and Hamilton in the roles, and opening night seemed to bring out a whole generation of their local peers to celebrate the performers and the company’s birthday. If you know Godot’s history at 7 Stages, the new production can feel a bit in the shadow of its predecessors, but it offers newcomers an affecting introduction to Beckett’s signature work.

Beckett was an Irishman who lived in Paris for most of his life, wrote in French and translated his work into English. While the names in Godot are European and the situation is universal, the setting can feel particularly like rural Ireland. Homeless, jobless Vladimir and Estragon, or “Didi” and “Gogo,” linger by the side of a lonely road waiting for the titular Godot, a wealthy but ambiguous figure who’s promised to save them, implicitly with an offer of work. But Beckett leaves the action subject to multiple interpretations, and the recurring religious imagery suggests the predicament of humanity trying to have faith in a God that never reveals Himself.

Seeing Hamilton and Finney in the roles again suggests that Didi and Gogo have been in suspension for more than two-and-a-half decades. Their alternately warm and contentious relationship proves the most affecting quality of the show. They bicker like an old married couple, and even though they acknowledge that they’re happier apart, they clearly need each other. Didi, more optimistic and self-aware, is almost like the caregiver to Gogo, who’s more earthy, short-sighted and prone to complaint.

Finney captures the gesticulations and larger-than-life expressiveness of a classic comedic character actor, finding funny business in how he munches carrots, struggles with his footwear and more. Hamilton makes Didi alternately winsome, hopeful and boiling with frustration. Sometimes the actors seem so focused on their own business that they don’t seem completely engaged with one another, but Beckett often writes the roles as talking past each other.

Every time I see Godot, I become more convinced that its secret stars are Pozzo and Lucky (Bart Hansard and Matt Baum), the indelibly weird master and servant. Whip-wielding Pozzo embodies privilege and entitlement as he’s alternately brutal toward Lucky and genteel toward Didi and Gogo; Hansard makes a delightful comedic meal of the role, with dainty body language, infantile mood swings and puffed-up prideful moments.

Baum’s lanky frame makes for a physically memorable Lucky, who shuffles across stage at end of rope. When he launches into a long speech — that increases in speed the more he talks — Baum conveys a broken man with impassioned ideas about society and religion who has become too damaged to articulate them. The pair offers a powerful portrayal of the ruling class and its dependency on servants while warning Didi and Gogo that they could face Lucky’s fate. If this could be in store for them, do they even want Godot to show up?

7 Stages seems interested in making Waiting for Godot accessible to a younger audience that may not be invested in past versions. (The company sent out a press release with the puckish subject line “Godot’s ETA: ¯\_(ツ)_/¯”.) There’s a bit of a paradox in the new production: Howard sets a fairly crisp pace for the action, which is welcome: nothing seems as long as a drawn-out, draggy Godot.

At the same time, the previous productions seemed to find their loveliest moments in their pregnant pauses, and the new one seems to have less of that ruminative quality. It offers plenty of laughs and no small amount of heartache, but seems more like “Godot 101” than “Advanced Beckett Studies.”

If anything, it leaves you hopeful that Finney, Hamilton and company will come back again for the show some time in the 2020s. We suspect it will be worth the wait. 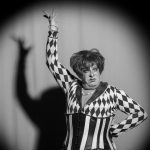 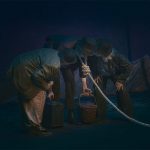