One on One with a Revolutionist: Parris Sarter

You’ve seen the trailer, now it’s time to learn more about each one of these badass women. Meet Parris Sarter who plays Marianne Angelle in Lauren Gunderson’s The Revolutionists. Here are some of her favorite moments, why she wanted to be involved, and what moment always makes her laugh:

Q. When you hear French Revolution your brain doesn’t automatically think comedy, but this play is indeed humorous. What line or moment always makes you giggle?

Q. Although funny, these women are not to be messed with. What is your character’s major strength?

A. Marianne’s strengths are courage, honesty, boldness, and love; but I think her major strength is that she is wonderfully complex. She fights for freedom for her country but at the same time she would rather be at home (San Domingue) with her husband and children enjoying life. Another example is how her perception of Marie Antoinette goes through a beautiful journey from seeing her as “the enemy” to a friend and fellow revolutionist.

Q. What made you want to be a part of this production?

A.  I was reading the 7 Stages season and I saw that they were doing this play. I read the synopsis of the play and went, “hmm…I bet there is a role for me” because this sounds fun, empowering, historical, enlightening, and all the good stuff you want to be a part of when doing a production.  I made a conscious decision and decided that I needed and wanted to be a part of an awesome show like The Revolutionists.

Q. Set in the past but incredibly poignant to issues today regarding equality, what do you hope audiences walk away saying?

A. I want the audience to walk away saying that these women were truly badass, but also say that it’s important to stand and fight for something that is important to you. To remember that these women didn’t wait around for anyone to fight their battles. They did it themselves, and if they die, they die. You have to be pro-active in the change that you want to see in the world. It is the common person that forces the government to reform, not the other way around. 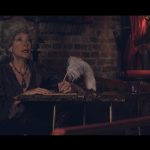 One on One with a Revolutionist: Stacy MelichInterviews